For the city of Bothell the year 2010 represented a shift from envisioning a dream to actually building the dream, City Manager Bob Stowe said during his "State of the City" address at Courtyard Hall in Country Village, sponsored by the Greater Bothell Chamber of Commerce on Wednesday. 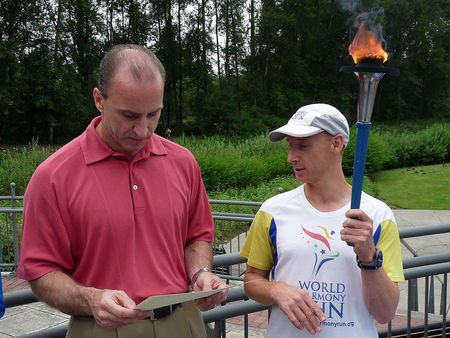 Beginning in April, the city has broken ground on nearly $80 million in projects as part of a total of $150 million in planned infrastructure improvements that, according to Stowe, will leverage $650 million in private investment. Bothell’s downtown revitalization project, Stowe said, is expected to generate 8,400 temporary construction jobs and 1,367 permanent family wage jobs.

Among those projects include the city’s Crossroads Project — which will create two new pedestrian-friendly downtown blocks; improvement of Wayne Curve including the realignment and widening of SR 522; the transformation of the old Anderson School building into a new McMenamins brewpub and 70-room hotel; development of a new city hall and civic campus; expansion of the park at Bothell Landing and the Main Street extension which includes the widening of SR 527 and mixed-use residential and retail development.

"How is it possible to embark on such large projects when all around us we hear of tight budgets, cutbacks and layoffs?" Stowe asked rhetorically. The city manager cited three financial strategies: aligning revenues and expenses, setting aside a substantial annual reserve and cultivating different types of revenue streams including grants.

"In 2006, during much better economic times, the city established the practice of aligning one-time expenses with one-time revenues and ongoing expenses with ongoing revenues," Stowe said. He explained that revenue that came to the city from one-time projects — like the sales tax on a large construction project — was used only for one-time city projects rather than for services that had to be paid annually.

Further, for the last four years the city had the foresight to set aside an ample 20 percent reserve from its general fund — doubling its previous practice and doubling what most cities set aside, he said — without having to ask citizens for additional tax dollars. He added that Bothell has not increased its property tax levy for the last five years and will not this year.

Finally, he cited the city’s balanced approach in its utilization of sales tax, property tax and utility tax — without being heavily reliant upon one in particular, like sales tax, and riding high during boom times but sinking low in an economic bust. And he added that Bothell continues to pursue grant funding aggressively and successfully — in 2010 the city was awarded over $7 million in federal and state grant dollars — with approximately one-third of the $150 million in proposed downtown investments coming from grant money.

"Through careful planning and money management the city is now able to invest in big projects during a time when labor and resources are less expensive," he said. "While other less fortunate jurisdictions have needed to pursue layoffs, furloughs or draconian cuts in services, Bothell’s prudent fiscal management has ensured the city would be able to prevail during these extremely difficult economic times."

Stowe spoke proudly of some of Bothell’s service highlights in 2010:

The Bothell Fire Department responded to nearly 4,800 fire and emergency calls last year with an average response time of just over five minutes and not one person died in a fire. The police department responded to 29,420 incidents, completed 6,875 cases and arrested 1,682 people and, according to Stowe, continues to boast one of the lowest crime rates in the region.

The Community Development Department, which handles planning and permitting, has made "huge improvements" in the permitting process: new multi-family permits are reviewed and returned in under two weeks and new commercial development permits are completed in less than three weeks.

"It’s important to have a reputation for efficient and friendly service in order to attract the right developers to invest in Bothell," Stowe said.

Besides downtown revitalization, Bothell’s other main initiative for 2011 is the proposed annexation of areas of unincorporated King County and Snohomish County. If approved by city council, annexation will advance toward formal approval by citizen vote in the 2011 general election, and approval there would add another 25,000 official citizens to the city. Bothell’s current population is approximately 33,500.

"These citizens give numerous reasons for wanting to annex to Bothell," Stowe said. "Some say they are motivated by a desire for more responsive police service than what a county can provide with its vast geographic responsibilities. Others express more localized control and governance regarding a variety of land use matters. And others want those taxes and fees that are generated in their community to stay in their community. Doing so offers a higher level of urban services — such as parks and recreation, public safety and local land use controls — rather than dispersing those taxes and fees across a larger geographic area of government."