Drivers have been forced to detour around the unsafe 240th St. SE bridge Until 2012

BOTHELL — For three months, drivers have been taking detours around a bridge that had to be closed because it’s unsafe.

This week, the city plans to talk about plans for replacing it.An open house regarding the 240th Street SE bridge is scheduled for Wednesday. The bridge is located over North Creek between 35th Avenue SE and Fitzgerald Road, just east of I-405 and just inside Snohomish County.

The bridge is on a minor arterial near several business parks, and commuters have had to skirt around it by using 228th Street SE and 35th Avenue SE instead of Fitzgerald Road, which is closer to I-405. 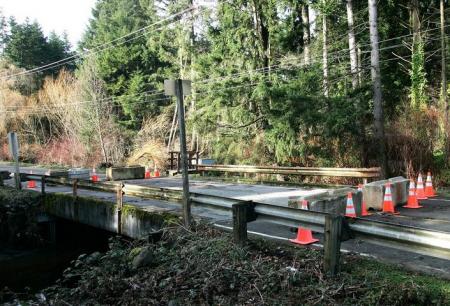 “There are a lot of commuters who go across I-405 and go across that bridge,” said Steve Morikawa, capital program manager for the city of Bothell.

The bridge was built on timber pilings in 1962. When it was inspected last October, the pilings were found to have deteriorated to the point where it is no longer safe for vehicles to drive over the bridge. It has since been closed. A recreational trail along North Creek, atop the streambank, remains open.

The bridge had been targeted for replacement in 2012 even before the inspection. Now, the city is trying to speed up the schedule, but because of environmental regulations, it probably won’t happen before then anyway.

The bridge is built over a salmon-bearing stream, and work in the water can only be done between July 1 and Sept. 15, Morikawa said.

Some of the other work, such as removing the top of the bridge, can be done at other times, he said.

Morikawa predicts work will begin next fall and will finish a year later, toward the end of 2012.

The $3.5 million cost of replacing the bridge will be covered by city funds and federal grants, according to the city.

The city still gets calls and complaints about the closure but most people are understanding, Morikawa said.

“I think people have been patient and good. I think it’s an inconvenience for people,” he said.